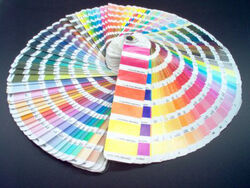 The Pantone Color Matching System (PMS) is an industry standard color matching and reproduction system. By creating a standardized and cataloged set of colors, Pantone allows various manufacturers in different locations to make use of this system in order to make sure their product colors will match without having to directly contact one another. The actual Pantone guides consist of a large number of thin cardboard sheets measuring approximately 6"×2" (15cm×5cm) which are printed on one side with a series of color swatches and then bound into a small flipbook. An example "page" might contain a number of blues varying from light to dark, or from a "true" blue toward a more turquoise shade.

Colors in the Pantone system are referred to by their allocated number, for example, 'PMS 130'. PMS colors are almost always used in branding and have also been used in government legislation to describe the colors of flags. Scottish Parliament debated a petition in January 2003 to refer to the blue in the Scottish flag (St. Andrew's Cross) as 'PMS 300'. Canada and South Korea, as well as organizations like the Fédération Internationale de l'Automobile (FIA) have also moved to match their colors to Pantone coded colors in an effort to avoid the erroneous production of their flags/logos. Several U.S. states including Texas have passed legislation for the use of PMS colors in their flags for this same reason. 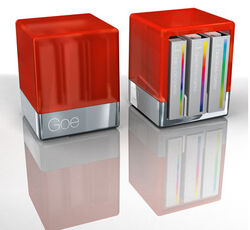 The Pantone system also allows for a variety of specialized colors to be produced including metallics and fluorescents. While the majority of the colors on the Pantone system are beyond the printed CMYK range, in 2001 Pantone began providing RGB translations of their existing colors. Pantone's latest system, "Goe," includes RGB as well as Lab values with each color. Computer screen-based colors use the red, green, blue (RGB) system to create various shades, while unlike the RGB and CMYK color models, the Lab color system is designed to approximate human vision. 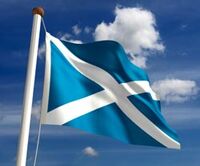 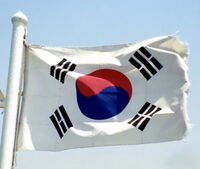 Fédération Internationale de l'Automobile
Add a photo to this gallery
Retrieved from "https://pantone.fandom.com/wiki/Pantone_Color_Matching_System?oldid=5495"
Community content is available under CC-BY-SA unless otherwise noted.