This color is drastically different than the sky blue from the pervious year. This color is much more exciting. It can appeal to the feminine side and yet is still sexy. 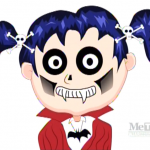